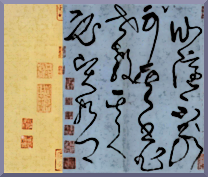 Zhang Xu (张旭), courtesy name Bogao (伯高), was a Chinese calligrapher and poet of the Tang Dynasty. A native of Suzhou, he became an official during the reign of Emperor Xuanzong. Zhang was one of the Eight Immortals of the Wine Cup in Du Fu's famous poem. He was also known as Rough Sage (草聖) for his great skill in the rough, or freely-cursive, script. He claimed to have grasped the essence of cursive writing by observing porters fight for their right-of-way against a princess' honor guard and by watching the solo performance of a famous sword-dancer named Lady Gongsun. When sufficiently lubricated, he might use his hair as a calligraphy brush before passing out drunk. Upon waking up, he would be very pleased at the quality of these works, which he could not reproduce in a sober state. The first of Zhang Xu's poems on this page was included in the Qing dynasty collection, Three Hundred Tang Poems. I have only been able to find five more. To my knowledge, there is no extant portrait of him. But we do have copies of his running script. I have used one of these for the image on this page.