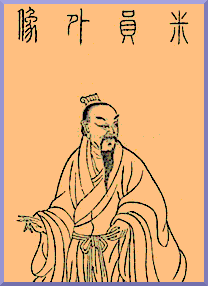 Mi Fu (米芾|米黻), 1051–1107, was a Chinese painter, poet, and calligrapher born during the Song Dynasty. He was strong-minded and peculiar. He was peculiar in the way he dressed, in the cumpulsive way he washed his face everywhere he went, in declaring that one of the big rocks in his garden was his brother, in the way he collected art and calligraphy. As a collector, he was always trading old for new, saying,

"When a man of today obtains such an old sample it seems to him as important as his life, which is ridiculous. It is in accordance with human nature, that things which satisfy the eye, when seen for a long time become boring; therefore they should be exchanged for fresh examples, which then appear doubly satisfying. This is the intelligent way of using pictures.”

For Mi Fu, calligraphy was intimately connected with the composing of poetry or painting. It required an alertness of mind and spirit, which he thought was best achieved through the enjoyment of wine. Through this he reached a state of excitement rather than drunkenness. His friend, Su Shi wrote that Mi Fu's "brush is like a sharp sword handled skillfully in fight or a bow which could shoot the arrow a thousand li, piercing anything that might be in its way.“

Mi Fu's manner of painting was also peculiar. He took to painting late in life. It is said that he always painted on paper which had not been prepared with gum or alum, never on silk or on the wall. He did not necessarily use the brush in painting with ink; sometimes he used paper sticks or sugar cane from which the juice had been extracted, or a calyx of the lotus. Of painting, he wrote:

“The study of Buddhist paintings implies moral guidance; they are of a superior kind. Then follow the landscapes, then pictures of bamboo, trees, walls and stones, and then come pictures of flowers and grass. As to pictures of men and women, birds and animals, they are for the amusement of the gentry and do not belong to the class of pure art treasures.”

The result of all these strong-minded peculiarities was that Mi Fu is esteemed as a painter, poet, and calligrapher. He substantially changed the path of painting landscapes and of calligraphy through his independence.