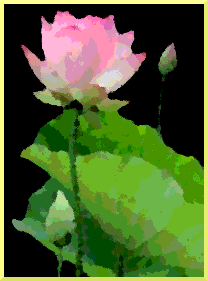 We, of course, do not know very much about Li Ye. And most of what we know comes from secondary or worse sources. She lived from some time in the latter part of Xuanzong's reign (712-756) until early in Dezong's (780-805). As an adult, she lived in Wuxing (now Huzhou, Zhejiang). She was a respected Daoist nun and moved in literary circles. Being a Daoist nun was a social option for women of the time and they were then exempt from taxes and allowed personal wealth and a degree of personal freedom.

A biographical dictionary in English by Chinese authors claims that she was a "coquette" and associates her with "debauchery." But their book has already been shown to be a bit lax in historical rigor. It was common for these Daoist nuns to associate with men in an intellectual and social way that resembled the ways of 18th century Parisian women who were famous for their salons. Such women are generally smarter than most men. Confucians did not approve of this (the salons, at least, and perhaps the intelligence, too.) Neo-Confucians, who came later, pretty much universally branded any such independent women as wild and easy sluts. Thanks to them, I am beginning to be uncomfortable with that word even though its original meaning was simply "a maid." It at least reproduces the Neo-Confucian low opinion of women in an unambiguous way. I'll try not to use it again unless I am quoting Laurence Sterne.

Intelligent and witty, Li Ye was eventually called to the court of the Emperor Daizong during the Dali period of 766-779. She described herself as middle-aged (35? 40?) at this time. Li Ye stayed in the palaces for a month, was treated well, and then was allowed to return to her Daoist vocation. There is no primary source evidence during this time or elsewhen (as far as I can tell) of any impropriety on her part. Later, under Emperor Dezong, Li Ye's poems which had been critical of the empire (at some point) were used to condemn her to death. No expression of intelligence in this lower realm of ours has ever gone unpunished.